“I was just a swimmer who got lucky.”

Christmas is over and the new year is here. So, you know what that means: Summer is right around the corner. Well, practically. What better way to celebrate than by talking about Esther Williams?

Esther Williams is shown in the underwater ballet scene from [Million Dollar Mermaid] in this photograph. — Image by © Bettmann/CORBIS

Okay, so it took me twenty years to watch an Esther Williams film.

It took a girl who spent many hours of her childhood watching old musicals and classic romance films that long to watch one of those movies. How? Well, I don’t know. I just never really got around to watching her movies until just after she passed away in the summer of 2013.

I remember sitting down one night right in front of the TV (I think I had actually just discovered Seven Brides for Seven Brothers that night. I watched it for the first time on an old VHS given to me. Edgy.)

“America’s Mermaid” passed away on June 6th of that year. TCM (Turner Classic Movies) was running a marathon of her swimming films as tribute to her life and legacy. I remember learning of her death on that June day. I first heard about it through social media, where I follow a lot of other film fans and often find the news first. It was shocking, but I realized that I hadn’t seen any of her films before. I knew, however, that she was a unique talent. I just didn’t know how unique.

As I began to discover her films, I learned that both of my Grandmas were really familiar with her films. I guess that’s not surprising, as she was huge in the 1940s and ’50s. My Grandma Riggs was an especially big fan of Esther’s. She’s told me about the wonderful memories she has of going to the local movie theater to watch her musicals. I hope I’m lucky enough to watch at least one Esther Williams musical on the big screen someday. I can’t imagine how vibrant they must look full-scale.

The first Esther movie I watched was Million Dollar Mermaid (1952). I watched and I was entranced by everything Esther. She was this magical, beautiful mermaid…but in human form. No fins, no tail, but a mermaid in every other possible way.

Here’s one of her musical/synchronized swimming numbers from the film – choreographed by the one and only Busby Berkeley:

And can we talk about her film fashion for a moment? She wore the most beautiful bathing suits in her movies and her non-bathing attire was always gorgeous, too. 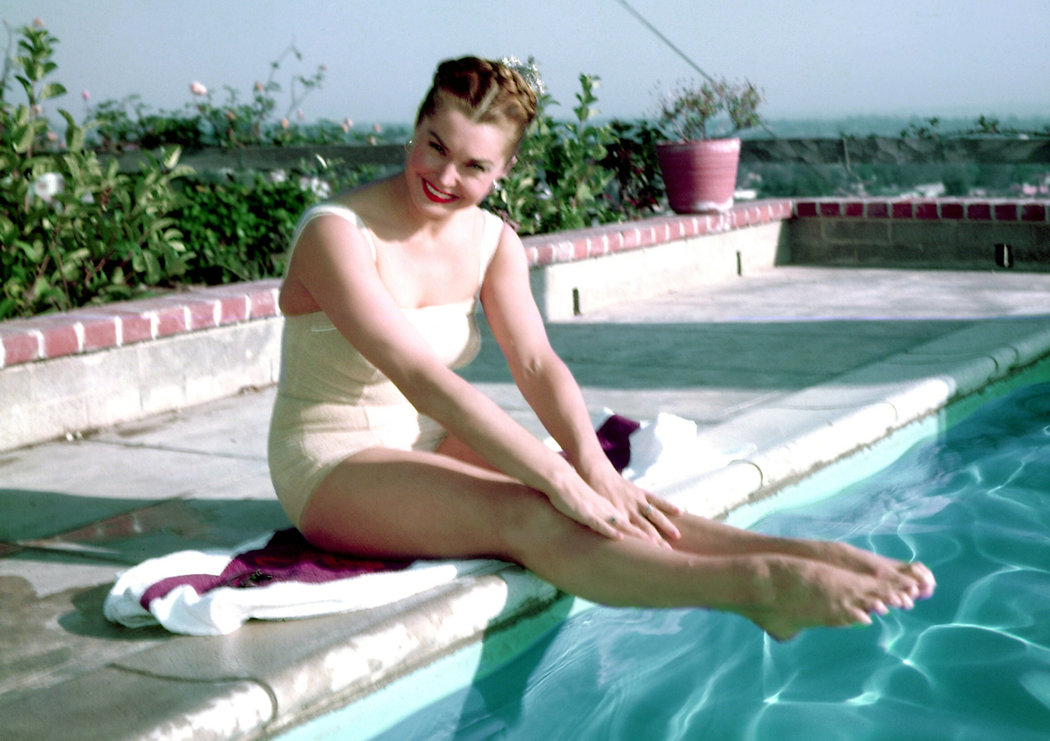 Although the plots in a typical Esther Williams movie are not filled with much complexity, their escapist plots -and, of course, the water ballets- are really what drew people in to to watch her. The idea of movies built around synchronized swimming may sound really cheesy to anyone not familiar with her films. But they were marvelous. MGM made each of her swimming numbers extravagant. (Side note: did MGM ever not do extravagant in the ’40s and ’50s?)

Oh, and how can I forget about the romantic plots/subplots? Esther Williams’s musicals were always filled with romance. She was often paired with dreamboats Van Johnson (check out Thrill of a Romance if you’re in the mood for a cute movie), Ricardo Montalbán (my personal pick is Neptune’s Daughter), and Howard Keel.

Esther was still active in her later years, despite suffering from a stroke in 2007. Among other achievements, a swimming pool company named itself after her, she created her own line of bathing suits (over at esther-williams.com, a number of bathing suits inspired by Esther are still being sold), and she appeared at the 1984 Olympics as a synchronized swimming commentator.

Today, many people remember her as one of the most effervescent stars of her time. The world really loved her.

There will never be another Esther Williams.

One thought on “Esther Williams: Baby, It’s Cold Outside”